Taking a look at the Russia / Myanmar relations from the 2017 Rohingya genocide to the mass murder of democracy defenders today in Myanmar.

“Russia likes to sell weapons. Russia’s economy and its people need the money,  but to do that, one must hold their nose to meet with buyers like the scumbags from Myanmar,” noted Simon Baldock, a regular contributor, and Israeli security analyst.

“In Myanmar, Russia’s leadership may again be smashing grenades in bare hands with a hammer as did Boris Yeltzin, at one time in his illustrious political career,” added Baldock, to suggest Russia may see benefit in reaching through Myanmar to Southeast Asia for military sales, but also a public relations fiasco-risk on the Myanmar human rights crimes coupled to a fear that Myanmar may fail as a state. “This could all blow up in the Kremlin’s ‘face‘,” Simon suggested.

In early March as Russian Defence officials were planning to send a delegation to Myanmar’s Armed Forces Day as the death count of civilians including kids approached 100, (now nearing 600 according to local activists to whom FPMag  provided the loan of  a Sat-Phone), a spokesperson for the Kremlin valiantly struggled with the spin doctoring.

Dmitry Peskov, spokesperson for the Kremlin, speaking about the Myanmar fiasco, told reporters on 3 March in Moscow that, “We assess the situation as alarming, and we are concerned about the information coming from there [Myanmar] about the growing number of civilian casualties.

“This is a matter of worry for us. We are very closely monitoring what is happening there,” said Mr. Peskov.

Earlier, and before the military junta coup that overturned a democratically elected civilian government in Myanmar, on 21 January, coup leader Aung Hlaing received Russian Defense Minister Army General Sergei Shoigu in Naypyitaw, according to the Tass news agency.  Aung Hlaing  and Sergei Shoigu reached an agreement on dozens of new weapons systems including drones, according to releases from both countries.

“Russia will supply Myanmar with Pantsir-S1 anti-aircraft missile and cannon systems, Orlan-10E unmanned aerial vehicles, and radar stations. The document was signed today (22.01.2021) in the presence of the Minister of Defense of the Russian Federation, General of the Army Sergei Shoigu, who is on an official visit to the Republic of the Union of Myanmar, and the Commander-in-Chief of the Armed Forces of Myanmar, Senior General Min Aung Hline. On behalf of the Russian side, the agreement was signed by the deputy head of the Russian military department, Colonel-General Alexander Fomin,”  citing Russian Official News Release (22.01.2021 (11:45) 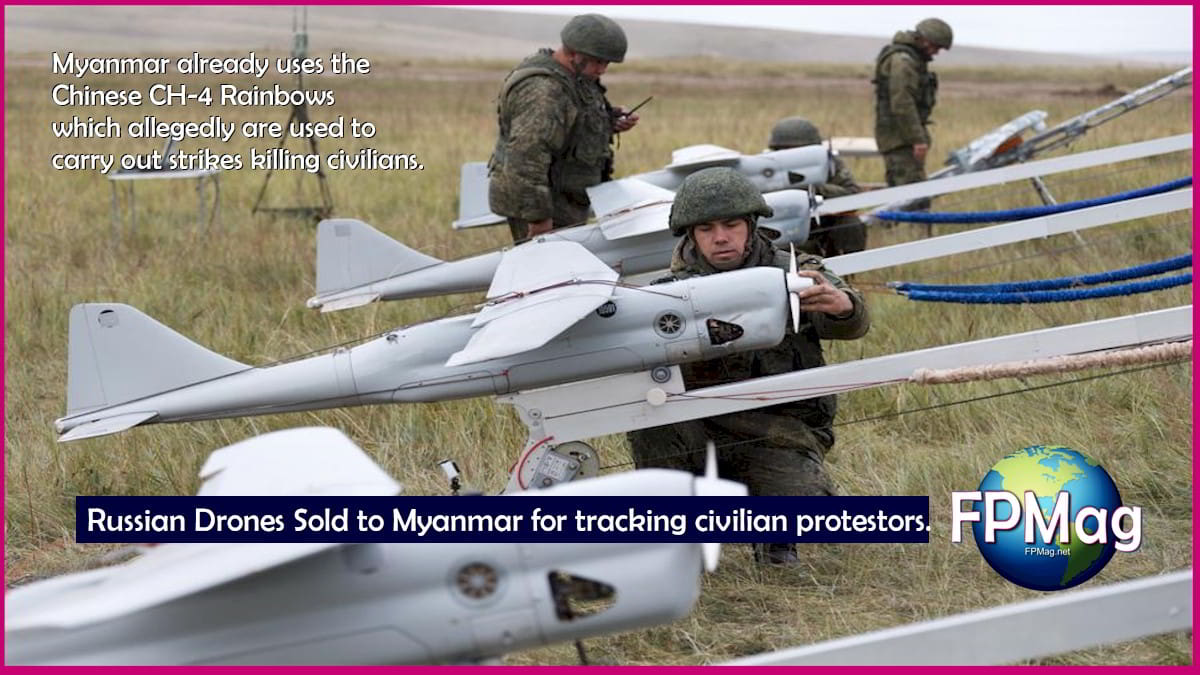 Rohingya leader Mohammad Yunus Arman said that he was not unhappy with Aung San Suu Kyi’s  imprisonment, Reuters was told. 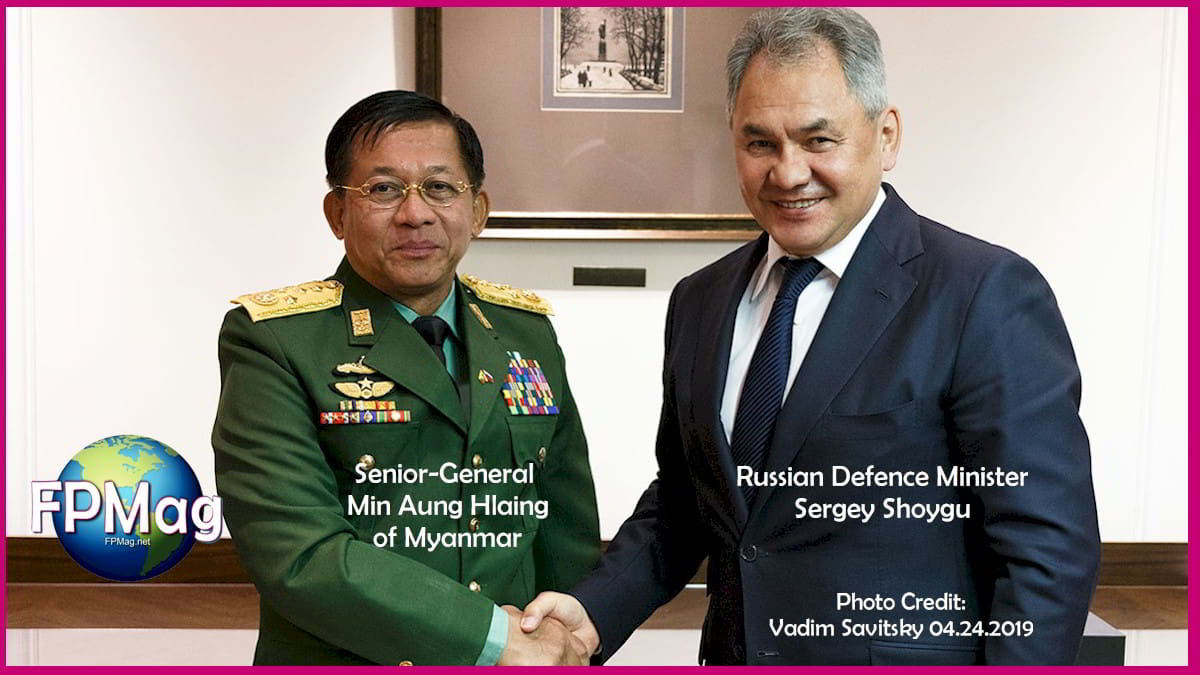 File Photo of the two men, buddies(?) Sergey Shoygu and Min Aung Hlaing 04.24.2019
“I know that a delegation from Myanmar visited Russian enterprises of the military-industrial complex and got acquainted with their products and production potential. Now you have an objective idea of ​​our capabilities, ”said Sergei Shoigu. He noted that Russia views Myanmar as a reliable ally and strategic partner in Southeast Asia and the Asia-Pacific region. “Russian-Myanmar cooperation in the military and military-technical fields is consistently developing, including thanks to your personal contribution to strengthening bilateral ties. I am confident that today’s talks will serve to strengthen interaction between the defense departments of the two countries, “the head of the Russian military department emphasized.” Photo Credit: Vadim Savitsky 04.24.2019  Art/Cropping/Enhancement: Rosa Yamamoto FPMag

Russia joined China to block a UN Security Council (UNSC) resolution condemning Myanmar’s genocide crimes against the Rohingya in 2017, according to UNSC records.

A 5 March 2021 agreed statement of the UNSC says, “The Security Council strongly condemns the violence against peaceful protestors, including against women, youth and children.”

“The council calls for the military to exercise utmost restraint and emphasizes that it is following the situation closely,” the statement continues. 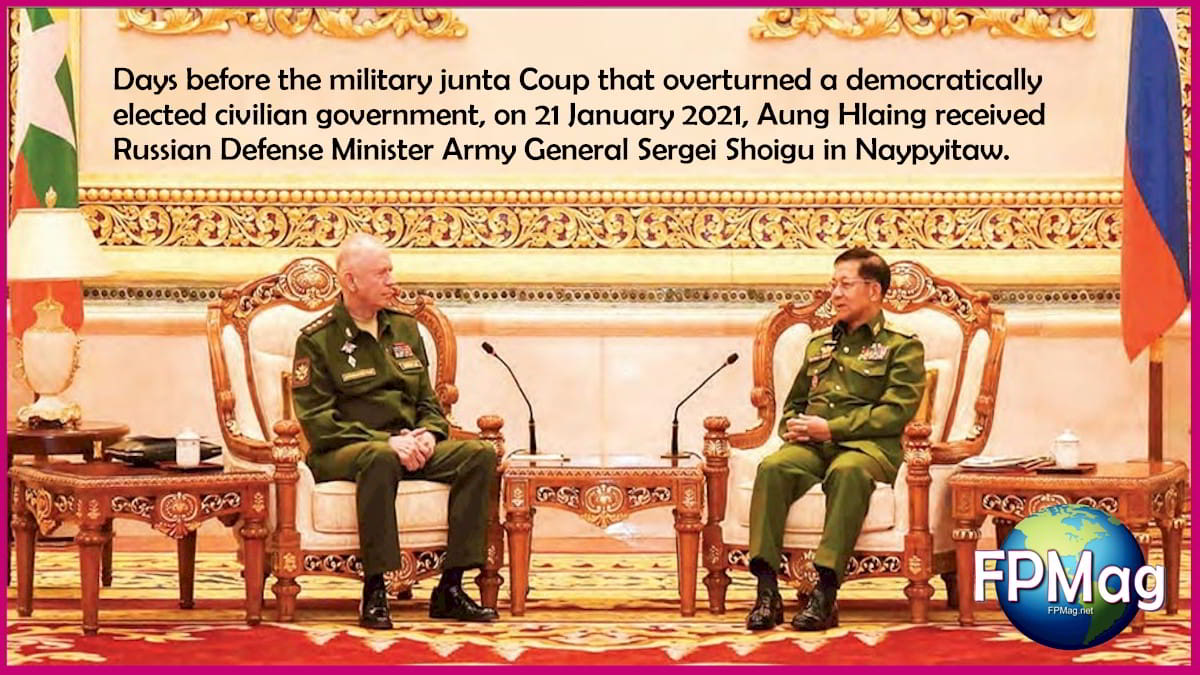 “There is an urgency for collective action. How much more can we allow the Myanmar military to get away with?” asks  UN Special Envoy for Myanmar, Christine Schraner Burgener. WATCH: See UNSC President’s statement in video below. 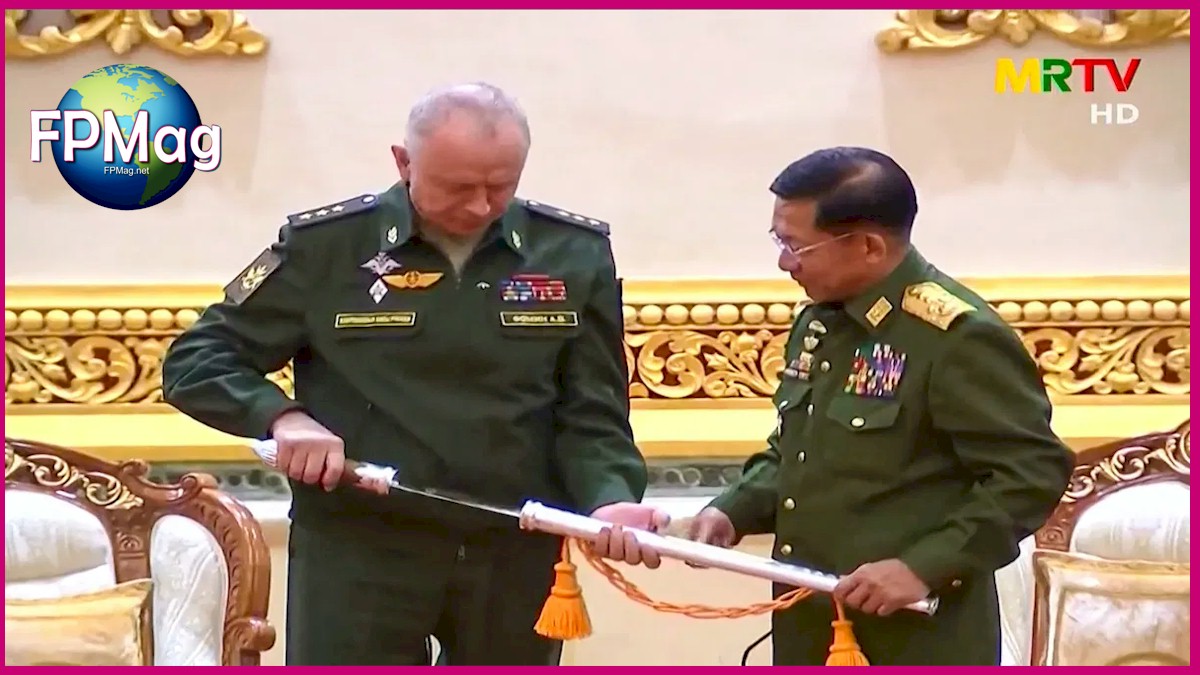 During a visit to Moscow in June 2020, before the November elections in Myanmar, Senior-General Min Aung Hlaing of Myanmar suggested to Russian officials that he would like to enter politics to become the leader of Myanmar, according to women who were clerical workers in the delegation.

On 2 February 2021, having arrested the elected government of Myanmar in a military junta coup and starting a mass murder campaign to kill opposition using Russian supplied weapons, Min Aung Hlaing became the self-appointed Chairman of the State Administration Council. According to UN fact-finding, Myanmar now has a genocidal mass murderer as leader for whom Russia turned out senior dignitaries to honour Min Aung Hlaing on Myanmar’s Armed Forces day, 27 March 2021. 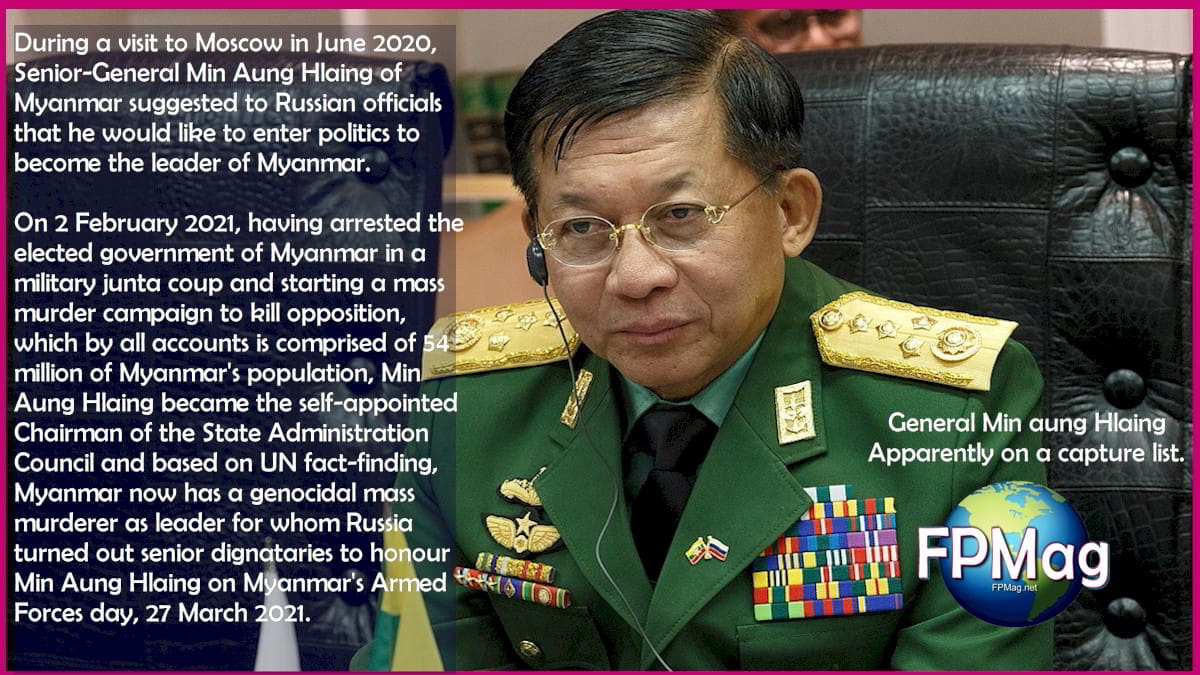 During a visit to Moscow in June 2020, before the November elections in Myanmar, Senior-General Min Aung Hlaing of Myanmar suggested to Russian officials that he would like to enter politics to become the leader of Myanmar, according to women who were clerical workers in the delegation. hE IS NOW Chairman of the State Administration Council.  Photo Credit: Vadim Savitsky 04.24.2019 Art/Cropping/Enhancement: Rosa Yamamoto FPMag

Genocidal Murderers, the six Myanmar generals submitted to the international Criminal Court in the 2017 Rohingya matter.