Philippines needs to act fast or lose its stake in the Spratlys.

Five years was too long for Manila to let the 2016 arbitral decision in favour of the Philippines go to pasture. That is what many pundits are now saying, and many want the Duterte government to act strongly as since Wednesday more than 240 Chinese militia vessels in aggregate are at Whitsun Reef and scattered around the region.

China lost the 2016 arbitral decision but the Philippines did nothing about its substantial win before an Arbitral Tribunal constituted under annex vii of the 1982 United Nations Convention On The Law Of The Sea.

These are not fishing persons, they are Chinese Naval Militia crewed vessels according to one of the sailor’s girl friend plus two other similar sources close to the operations of these vessels since December 2020.

There are an estimated two billion Asians living in the countries around the South China Sea. Millions rely on the sea for their livelihood. What is happening is a catastrophe for many hundreds of towns and villages which sea-going communities no longer have access to their traditional fisheries, according to numerous local complainants.

China has been taking that livelihood, or some of it, away from at least half a billion. China’s marine militia rams and sinks the little fishing boats leaving Philippines mariners to fend for themselves in  the open waters. Vietnamese fishers have endured the same treatment, say numerous media accounts of such incidents.

China’s claims—up to 90% of the waterways of the South China Sea—are outrageous and intellectually bankrupt, say many experts; and the tribunal  said as much in a polite way as well.

This South China Sea story is told too often with warships but thousands of these is what it is really all about. Asian families need to eat but China has thwarted their livelihood, robbing fishermen of their catch, equipment and ships. Photo Credit: Micheal John/FPMag  Art/Cropping/Enhancement: Rosa Yamamoto FPMag

The Spratly Islands should be managed and owned by  the Philippines suggests the ecology side.* “Major disputes in the South China Sea are putting critical habitat—and the food supply of millions—at risk,” says National Geographic.

The region most contested by the Philippines is a reasonably short sea trip from Palawan Island, an archipelagic province of the Philippines. Some 110 million Filipinos all live on islands of the South China Sea and the West Philippines Sea. Regrettably the Spratlys region has been heavily over-exploited, damaging the habitat of turtles and sea birds as well as adding to the already heavy pollution of the region. It is a region that has also been overfished according to various ecology NGOs.

This is  a longer story for another time, but the Philippines because of some past transgressions has had a number of ecological dedications imposed on its islands and as a consequence has learned how to conduct the management of eco-protected assets. It therefore, according to some observers FPMag spoke with, is in a good position to manage the Spratlys. Arguably it could enter into an MoU with other claimants as Malaysia and Vietnam are doing now.

But China wants to take it all for itself, and it competes with Vietnam to some extent under the heading of ‘overfishing’.

Worse, China’s dredging and building military bases on the reefs of the Spratly Islands, some 600 coral reefs according to the World Wildlife Federation, has also damaged the ecological balance of the region say experts.

“This ecoregion encompasses several hundred islands, atolls, rocks, cays, banks, and reefs in three archipelagos of the South China Sea. Coral reefs are the predominant structure of these islands; the Spratly group contains over 600 coral reefs in total. Little vegetation grows on these islands, which are subject to intense monsoons. They do, however, provide important habitat for many seabirds, as well as green and hawksbill sea turtles. Unfortunately, the South China Sea Islands are still largely a mystery. Scientists have focused their research on the marine environment, while the ecology of the terrestrial environment remains relatively unknown. Ownership of many of the islands in this busy commercial fishery and trade route is disputed. Political instability and the increasing industrialization of neighboring countries has led to serious disruption of native flora and fauna, overexploitation of natural resources, and environmental pollution.” Citing World Wildlife Federation

Malaysia and Vietnam no longer at loggerheads over Vietnamese poaching if MoU is signed.

What may provide some relief to a 15-year-old squabble is an initiative of Malaysia and Vietnam which nations intend to sign a memorandum of understanding on fishing rights and resource management. These two nations may be setting a pattern for dialogue. See: Women’s Proposal to ECOSOC for Agreement South China Sea English DRAFT

The Malaysian Maritime Enforcement Agency (MMEA) director-general Datuk Mohd Zubil Mat Som said in early April that the draft of the MoU was currently at the final stage and would be submitted to the Attorney-General’s Chambers to be reviewed.

“Both parties, namely the MMEA and Vietnam Coast Guard have agreed to sign the MoU which involves cooperation in various fields including enforcement and search and rescue operations, said the Malaysian director-general.

The Vietnamese / Malaysian MoU will set out that the parties must use the Automatic Identification System on their vessels and to do otherwise would constitute an infraction.

Meanwhile, the Philippines must do both, dialogue with its regional partners; and give China’s suspiciously behaving vessels the steel-toe boot, say many experts.

“This problem needs to be fixed to the benefit of the Philippines. What China has done is High Seas Piracy in contravention of the United Nations Convention On The Law Of The Sea. Either seize the vessels that have “over-stayed their welcome and now act suspiciously” (grounds) and arrest the skeleton crews or the Philippines has lost the Spratlys and more,” says Simon Baldock, an Israel-based security analyst.

China has had possession of what the Philippines once claimed as its own while the Philippines acquiesced since July 2016. “I wonder if five years is a long time for a squatter to claim rights of possession, but the weakest of all of China’s claims is indeed the Spratly’s based a little on the French-Sino war outcome (Tonquin War) plus the post WWII actions of Japan giving all the islands to China. Nevertheless the strongest case is the Philippines’ claim,” says Baldock who has been poring over history books on the matter for the past three years.

“The Japanese occupied all four groups of South China Sea islands during World War II, and returned them, along with other territories, to China after World War II. In both the San Francisco Peace Treaty of 1951 and the Sino-Japanese Peace Treaty of 1952, Japan renounced its claim over the Spratly and Paracel Islands. The representatives of the Republic of Vietnam declared its sovereignty over the Spratly Islands and the Paracel Islands in the San Francisco Peace Conference of 1951. China was not invited to participate.
“Both Taiwan and the PRC, however, repeatedly refuted the claims by all other countries for these islands. In summary, disputing parties are the Republic of Vietnam (before 1975), the Democratic Republic of Vietnam (after 1975), the Philippines, Malaysia, the PRC, and the Republic of China.

“From 1973 to 1988, armed conflicts occurred between Vietnam (as invader) and China (as defender). Both Chinas (either Republic of China or PRC) maintained claims that the four groups of islands in South China are solely Chinese territory. They base such claims on traditional concepts of sovereignty, independence and territorial integrity.

Manila’s claim has been weakened by its acquiescence.  Argument about possessing of Whitsun Reef, for example, is swayed by China’s possession and a couple hundred ships located at Whitsun Reef and all around the Spratlys since last year and likely off and on since 2016.

Since the end of 2020 according to historic imaging supplied by Simularity Inc., China has occupied Whitsun Reef.

Satellite imagery dating back to the end of 2020 indicates that what appears to be many of the same Chinese marine militia vessels have been at Whitsun Reef for many months more than the media reports suggest and more than the Philippines government was heretofore aware if its official announcements are t he complete story. Statements made by Manila since 7 March, compared to American satellite images which show the presence of the vessels go back to November of 2020. 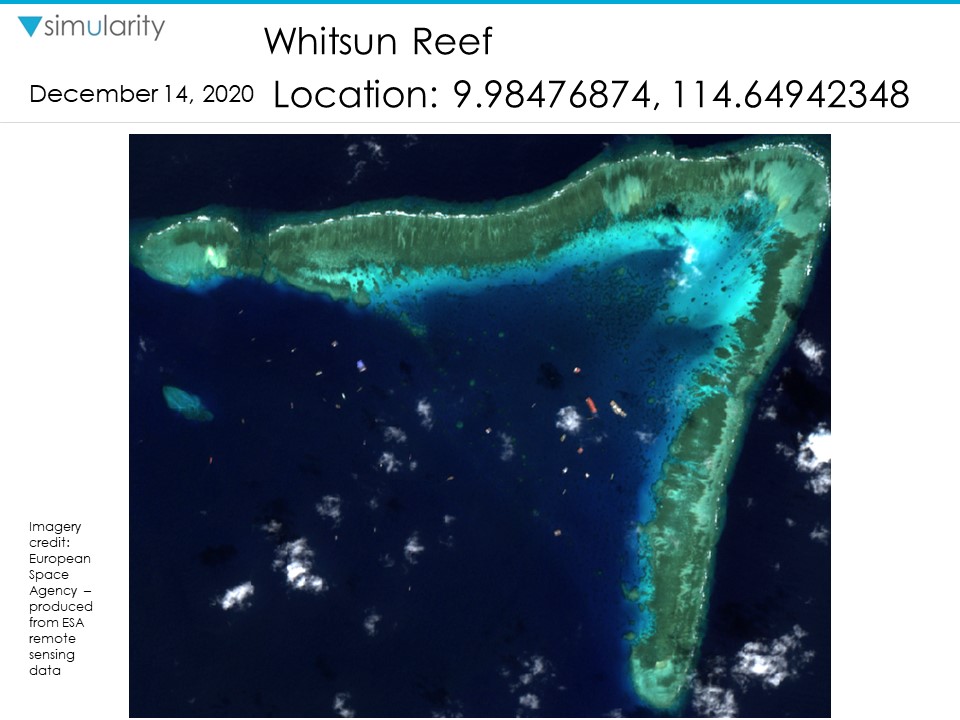 14 December 2020 Satellite image of Whitsun reef. Previously published 27 March 2021 in “Whopping lies from China leave its position indefensible“.  Photo Credit: Simularity Inc.
A large number of vessels are seen here in this satellite image taken on 14 December 2020 at Whitsun Reef about 175 nm from the Philippines but well inside Philippines exclusive economic zone. “What it looks like,” says a Vietnamese fishing boat captain FPMag spoke with, is that “they [China] were about to build another military base.”  That is the speculation or  scuttlebutt among several fisher people, but not informed comment.

The article " Philippines needs to act fast or lose its stake in the Spratlys. " was written by Author: Melissa Hemingway (Biography, Email) Senior Staff Writer and Associate Editor at Large
Contact Melissa Hemingway on Twitter ~ Facebook ~ Find on YouTube