'Our sovereignty is non-negotiable' trumped by Filipino hunger

This is a human rights issue and China is more of a cold-fish heartless villain than Manila realizes.

1. “We can negotiate on matters of mutual concern and benefit, but make no mistake about it – our sovereignty is non-negotiable,” said Philippines Presidential Chief Legal Counsel Salvador Panelo, in a release.

2. “People are starving. Many of the 2 billion Asians in the 12 countries surrounding the South China sea, go to bed hungry,” say UBC Professors

This is a human rights story.

“What Mr. Panelo may be missing is that this is a human rights issue more than a law of the sea issue. China is killing fishermen and their villages, towns and cities around the world, but also right in Mr. Duterte’s back yard. He needs to listen to his people,” says a visiting student to the University of the Philippines.

China’s awful environmental conduct in the South and East China seas, particularly its conduct of starving whole coastlines of fishing villages of their livelihoods—in the Philippines, Vietnam, Malaysia, Indonesia, Japan, South Korea, and the DPRK,—gives credence to strong concerns about China’s environmental fails raised by the Yale School of  the Environment.

“The Philippines recent position is as clear and righteous as the day is bright and the night is dark,” says Philip Wallis, a visiting student at the University of the Philippines.

China lies treats Duterte government and all the Philippines’ population as people regarded as worthless or contemptible.

“The Manila government must stay the course. The Chinese are lying through their teeth on many scores and it is very awkward to watch because the lies are completely juvenile at best, and otherwise make the Ambassador to the Philippines and and the China Foreign affairs spokeswoman look like slippery gangsters who see Filipinos as shucks—people regarded as worthless or contemptible.”

“America hasn’t a leg to stand on, only military might, and that will not work,” says Israeli security specialist. Mr. Panela is right, only negotiations between the parties will work for the Philippines—maybe a few Yankee guns pointing over the shoulders of the little guys, won’t hurt. But they need to sink some junk boats first, because a fist that never punched isn’t a fist.”

“This fight over the territory, we can resolve through negotiations or by acknowledging international laws. While we recognize the historical, traditional ties we have with China which we nurtured throughout generations, what they have been doing there at the Julian Felipe Reef has created cracks we don’t like,” stated Salvador Panelo.

“America is not a good ally in this matter. Why? Because it is a pervasive human rights issue. Fishing means food and people are starving. America leadership doesn’t really know what that is” says University Student who agrees with China’s 2020 assessment of American Human Rights Violations

The worst human rights complaints from America against China are somewhat devoid of proven fact and hypocritical like ‘black kettle calling the saucepan, “black”‘, as reported by China State media succinctly but not as completely as it could be in The Report on Human Rights Violations in the United States in 2020.

Is the Philippines position best stated by its ordinary people? Their government has not been listening.

The people’s language is ‘Down to Earth’, or ‘Earthy’, but easier to decipher then the politically obfuscated mumbo jumbo in Manila, say a few honest “don’t-tell-anyone-I said-this” types in the Embassies in Manila.

The global consensus on Embassy row in Manila seems to be in a straw poll, that Mr. Panelo has been hitting nail-heads, and “President Duterte might best keep him on the job and sew the lips of the cacophony of me too’ers.” 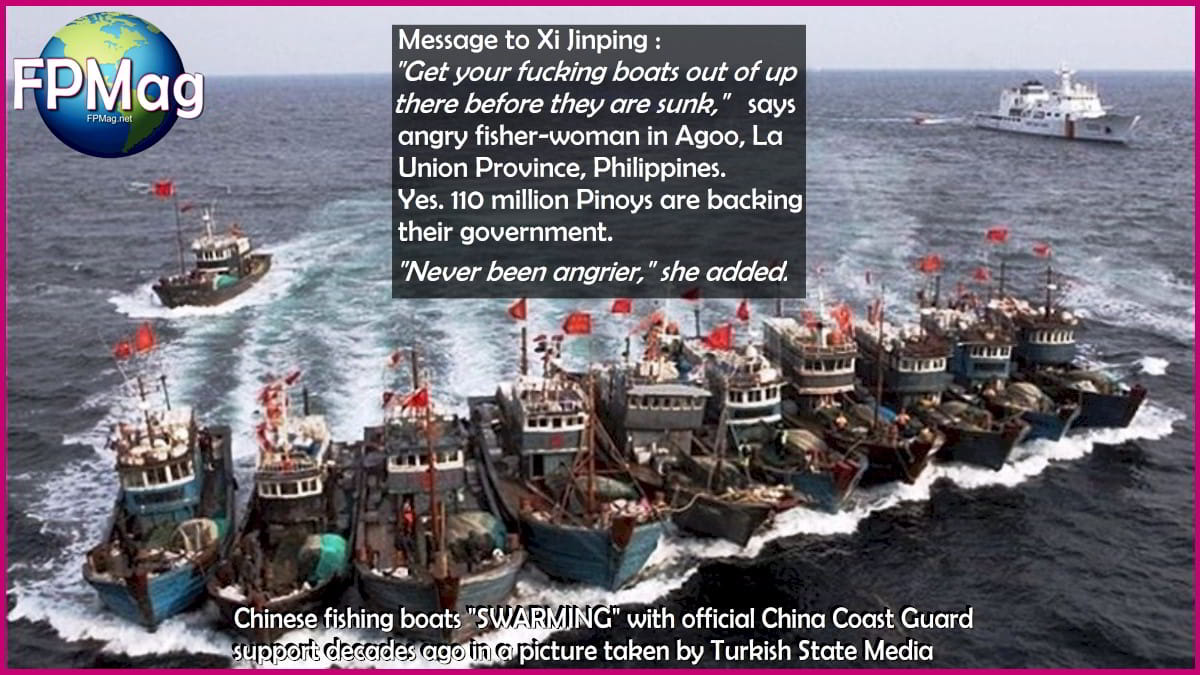 You can click the Image and read the comment of the fisher lady from Agoo, La Union. Philippines. These folks back their government but they are hungry, want more fishing rights and are angry. Turkish state media ancient file photo. Familiar tactics: SWARMING fishing boats backed by China Coast Guard.  Art/Cropping/Enhancement: Rosa Yamamoto FPMag

Why are North Korean fisherman washing ashore dead, far from home, near and in Japan, for many years?

Heart breaking news explains the DPRK mystery, according to the research of Ian Urbina of Yale’s School of the Environment. 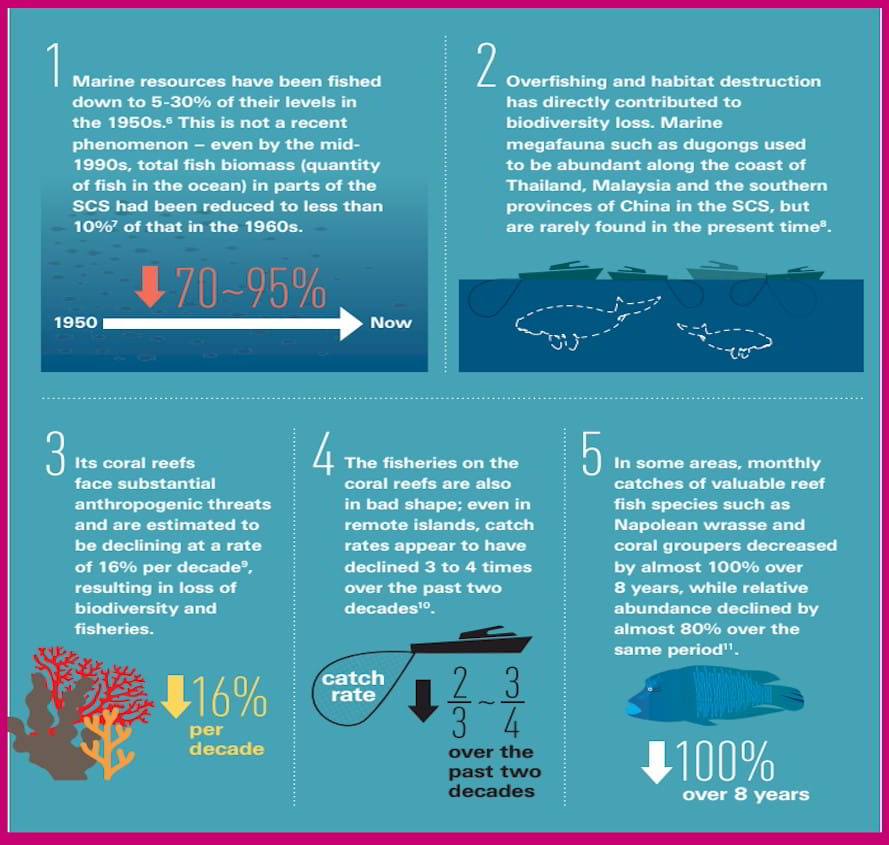 “Deliberately stealing the food of another nation makes China’s conduct a human rights violation of a high degree of atrocity,” says the RINJ Women who have been hammering this issue for nearly a decade.

Small-time fishermen have been mysteriously ghosting dead in their boats in the chilly dark of night, washing ashore, all crew dead, in Japan, as they perished in extended searches for their family’s fish catch.

North Korean port city of Chongjin was known as Widows Town for the number of sailors who never come home. 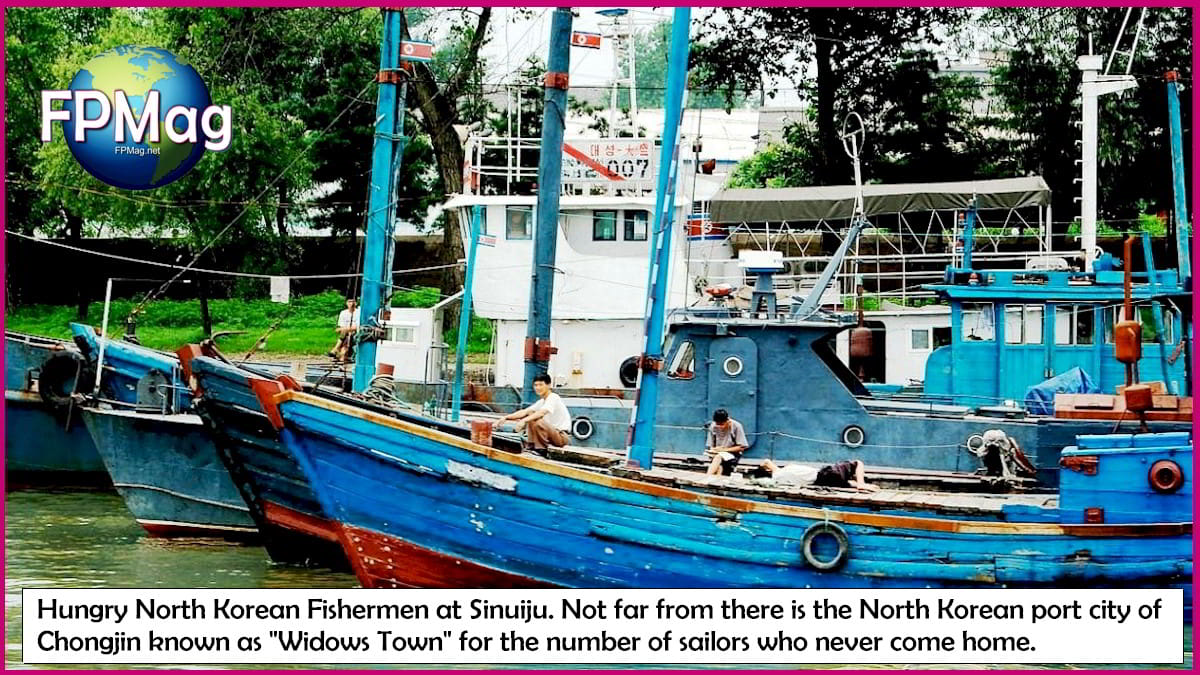 “The Chinese squid fishing fleet in North Korean waters has at times numbered up to 800 vessels and has caused a 70% decline in squid stock in those waters,” as reported in Wikipedia (North Korean ghost ships).
According to Global Fisheries Watch, “This is the largest known case of illegal fishing perpetrated by a single industrial fleet operating in another nation’s waters.”
Photo Credit Z. Hart Licensed under the Creative Commons Attribution 3.0
Art/Cropping/Enhancement: Rosa Yamamoto FPMag

A recent investigation Ian Urbina conducted at the Yale School of the Environment for NBC News, reports that: “China is sending a previously invisible armada of industrial boats to illegally fish in North Korean waters, forcing out smaller North Korean boats and leading to a decline in once-abundant squid stocks of more than 70 percent.”

The North Korean fishermen washing up in Japan apparently ventured too far from their normal fisheries in a vain search for squid, and perished. 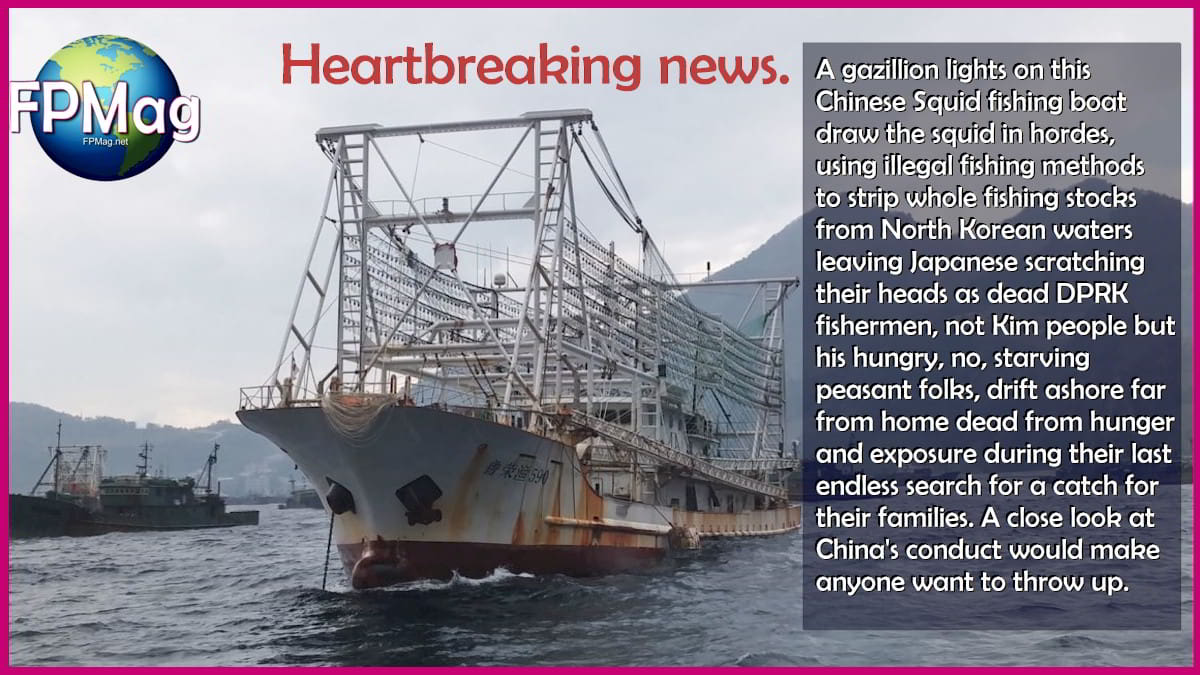 Editor’s note: A gazillion lights on this Chinese Squid fishing boat draw the squid in hordes, using illegal fishing methods to strip whole fishing stocks from North Korean waters leaving Japanese scratching their heads as dead DPRK fishermen, not Kim people but his hungry, no, starving peasant folks, drift ashore far from home dead from hunger and exposure during their last endless search for a catch for their families. A close look at China’s conduct would make anyone want to throw up.

“This is the largest known case of illegal fishing perpetrated by a single industrial fleet operating in another nation’s waters.”

Editor’s note: China’s conduct towards its so-called friend, the starving DPRK, is a crime against humanity. It is disgusting behaviour. The Chinese conduct is reprehensible. Stop being blind to this. You are being treated the same way, Mr. Duterte. China is not your friend.

Vessels accused by Indonesia of poaching in its waters include those from Vietnam, Thailand, the Philippines, Malaysia and China, Vietnam being the worst.

China is not alone in these violations. And Vietnam has a much larger fishing fleet  than China.

The parties need to sort things out and share resources. Making war puts at risk their two billion population. Making a diplomatic storm is leaving communities hungry in the midst of a horrible pandemic. Starving populations at a time like this will have a blowback not even the strongest and nastiest authoritarians can cope with. This is a time for governments to govern for the people and not their selves.  Imagine two billion people in the streets with pitchforks and sticks before you go to sleep tonight. Then govern tomorrow for your people, not yourself.