“Deceiving CNN into providing ‘critics’ of the junta for retribution is just one more step in Myanmar’s move to end reportage in the country,” says Rose Catalano of FPMag‘s editorial board.

“There is no longer a free press in Myanmar,” says Reporters Without Borders.

“The only print media have been official newspapers controlled by the military since 17 March, after the last independent daily in circulation, The Standard Time (San Taw Chain in Burmese), took the same decision as its four rivals and suspended its print edition, citing distribution problems since the coup. Ten days after the information ministry told media to stop using the terms “junta” and “coup d’état” or face sanctions, the Myanmar Times suddenly suspended operations on 21 February “for three months,” according to the welcome message on its website. The website of the newspaper The Voice has not been updated since 1 March,” reports  Reporters Without Borders.

The International Press Institute (IPI), issued a statement on 3 February 2021 to say that “[this] global network of editors, media executives and leading journalists for press freedom, today condemned the harassment of journalists covering protests amid Myanmar’s military coup d’état and called on the authorities to immediately restore internet services.”

The outcry is outrage from global human rights groups and from Nation States around the world.

On 3 February 2021, the command of the Tatmadaw instructed the 33rd Division and the 99th Light Infantry Division, both run by Generals who have been named by the US President for sanctions and all of which Generals have been spotted in previous years as part of the cause of the Rohingya Human Rights crisis, to commit crimes against journalists and civil society workers.

On 14 November 2019, the International Criminal Court finally launched an investigation into the Tatmadaw crimes against humanity.

In a statement at the time, the ICC said, “Pre-Trial Chamber III of the International Criminal Court  authorized the ICC Prosecutor to proceed with an investigation for the alleged crimes within the ICC’s jurisdiction in the Situation in the People’s Republic of Bangladesh/Republic of the Union of Myanmar (“the situation in Bangladesh/Myanmar”).” 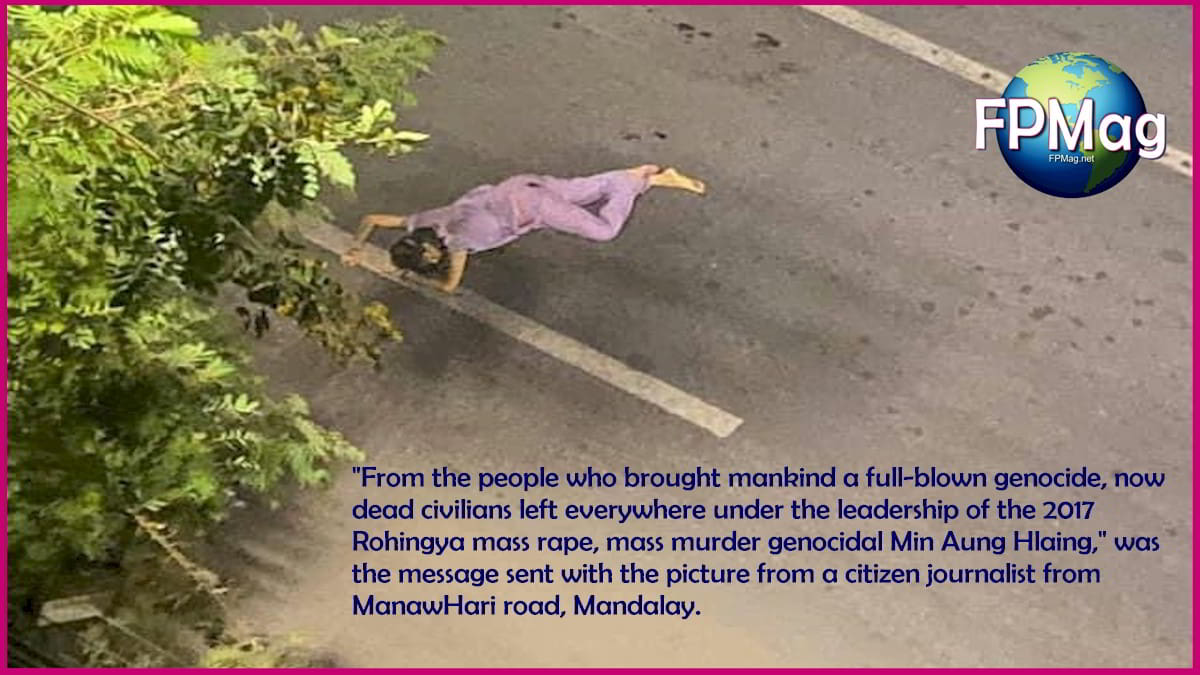 The outcry is rage from global human rights groups. One has marked 6 Generals for capture to be brought to the Hague for questioning but the qualifying arrest matter that is contiguous to a serious crime is more about the killing of three local support workers of the RINJ Foundation and the search and destroy orders to two infantry divisions. See”: RINJ HIV Test and Treat Team has evacuated Myanmar
2017 Crimes against Humanity that Russia and China have given impunity because of their veto power on the United Nations Security Council are now under full investigation by the ICC and eventually the 6 Generals will be needed to attend the Hague. Photo source supplied. Art/Cropping/Enhancement: Rosa Yamamoto FPMag

At least a dozen reporters are facing 3-years in prison for writing articles critical of the  Tatmadaw, according to Reporters Without Borders which has made strong statements in the matter, particularly regarding the rights of journalists, many of whom are being persecuted by the Tatmadaw.

Two of the journos currently held without bail, wrote about Myanmar’s ruthless military and it’s six, alleged war-criminal Generals who have been deemed responsible by the global community outside of Russia and China, of committing crimes against humanity in the Rohingya matter. The story was prompted by a massive fire in a Bangladesh camp holding tens of thousands of Rohingya refugees.

AlJazeera’s Faisal Mahmud who likely broke the full human interest story, reported 27 March that on the Monday (22 March) a “huge fire broke out in the Balukhali refugee camp in Cox’s Bazar, killing at least 15 people, wounding hundreds and leaving tens of thousands of Rohingya homeless, again.”

The story of the fire prompted some local journalists in Myanmar to write articles about the fire with background pieces on well-established facts of the Rohingya genocide as alleged to the International Criminal Court which is approved to continue an investigation of extremely serious crimes against humanity.

All of these journalists are professional wordsmiths with records of accurate reportage and they did write accurate accounts, as they always do. They must be released immediately.

America names perpetrators and removes their ability to access $1-Billion the Generals have banked in America. (Biden said the money was there but did not explain how or why.)

In a precisely targeted move, US President Joseph Biden implemented sanctions against the military regime in Myanmar to prevent six generals from accessing $1 billion in Myanmar government funds banked in the United States.

In the released statement from the White House, three entities are also described, some very fishy, say observers. CNN has said it is digging into this.

“Myanmar Ruby Enterprise and Myanmar Imperial Jade Co., LTD. which are wholly owned subsidiaries of a conglomerate owned or controlled by the Burmese military, have also been designated,” said Biden’s statement

Biden said, “The U.S. government is taking steps to prevent the generals from improperly accessing more than $1 billion in Burmese government funds held in the United States. While the United States removed sanctions on Burma over the past decade based on Burma’s progress toward democracy, today’s sanction actions provide punitive measures against those who seek to thwart the will of the Burmese people towards democracy.”

The Myanmar People’s Movement against the “junta” and “coup d’état” is all inclusive of Myanmar’s population if two important polls are to be believed. One poll is the November 2020 ballot boxes and the other was an opinion poll.

Polls in Burma in the time before and after the November 2020 election, indicated nearly 100% support for a democratically elected civilian government. This view followed 50 years of tyranny and death under a military junta, according to President Biden’s statement.

A civilian/military coalition which suffered a marred reputation over the genocidal attacks against the Rohingya peoples had cast aspersion on Aung San Suu Kyi’s ruling National League for Democracy (NLD) around the world but the population gave her a landslide victory.

You will love the people of Myanmar, says Humanitarian worker who has spent years in-country.

“If you have ever visit Myanmar, you will love the people, especially the women and girls who are family center points internally and liaisons to the communities, ” said Sandra Ellingsworth who has led a medical birthing and HIV Test-n-Treat program in the country for The RINJ Foundation . 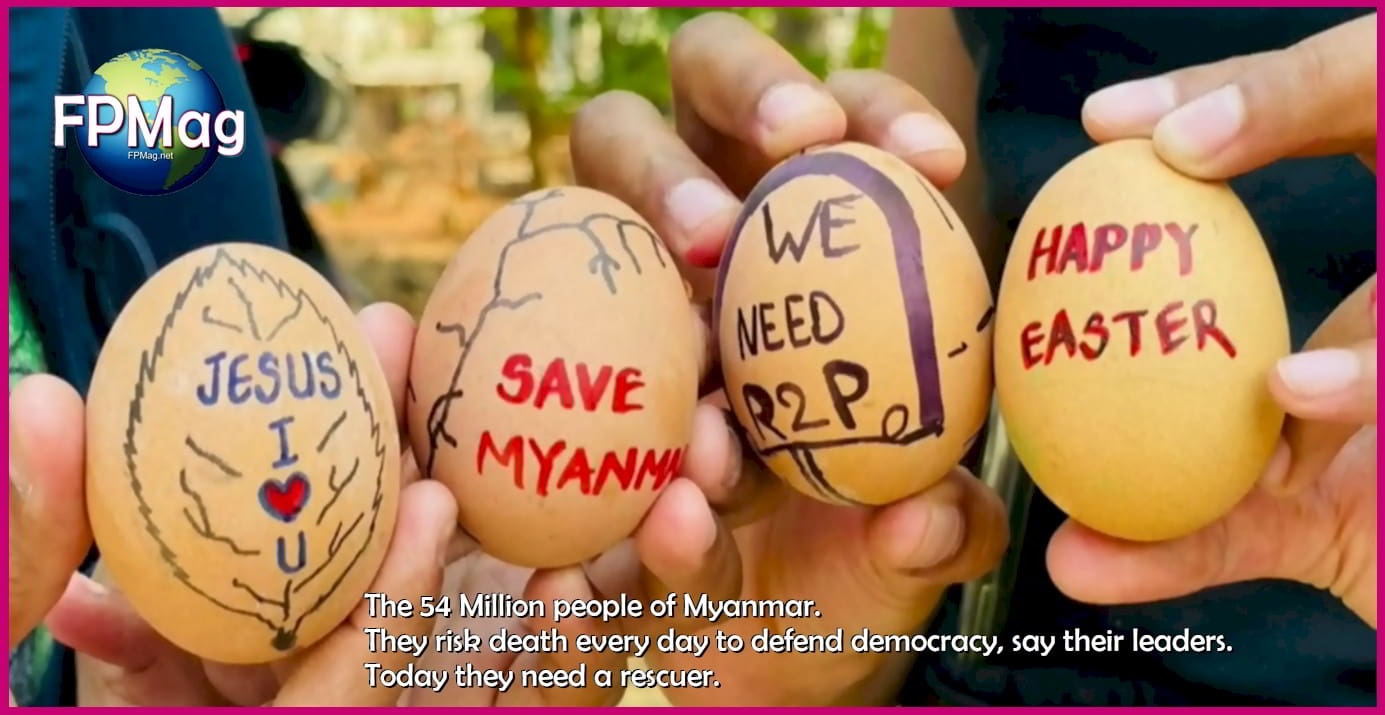 Women theme their love of democracy with grass roots love and a request for a rescuer. Photo source supplied, one of hundreds circulating. Art/Cropping/Enhancement: Rosa Yamamoto FPMag 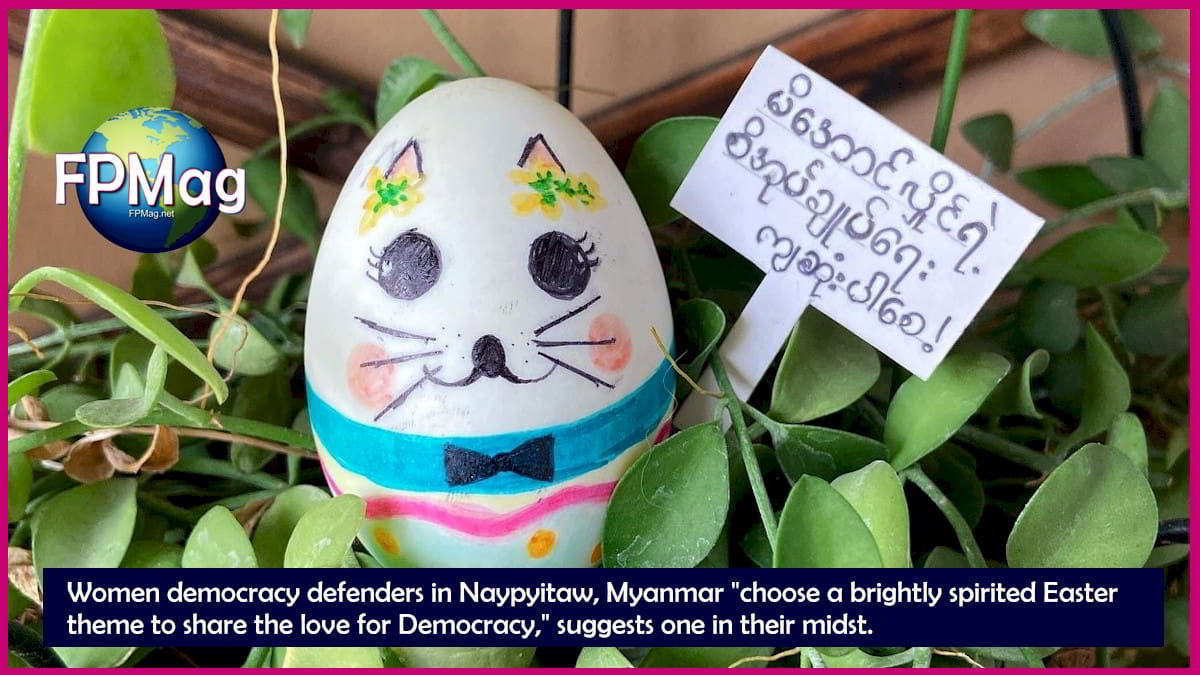 “People talking to this CNN Clarissa Ward Show crew on 1 April, including the strawberry blonde shopkeeper in the picture, have been detained and held without warrant,” says an activist via Sat-Phone. 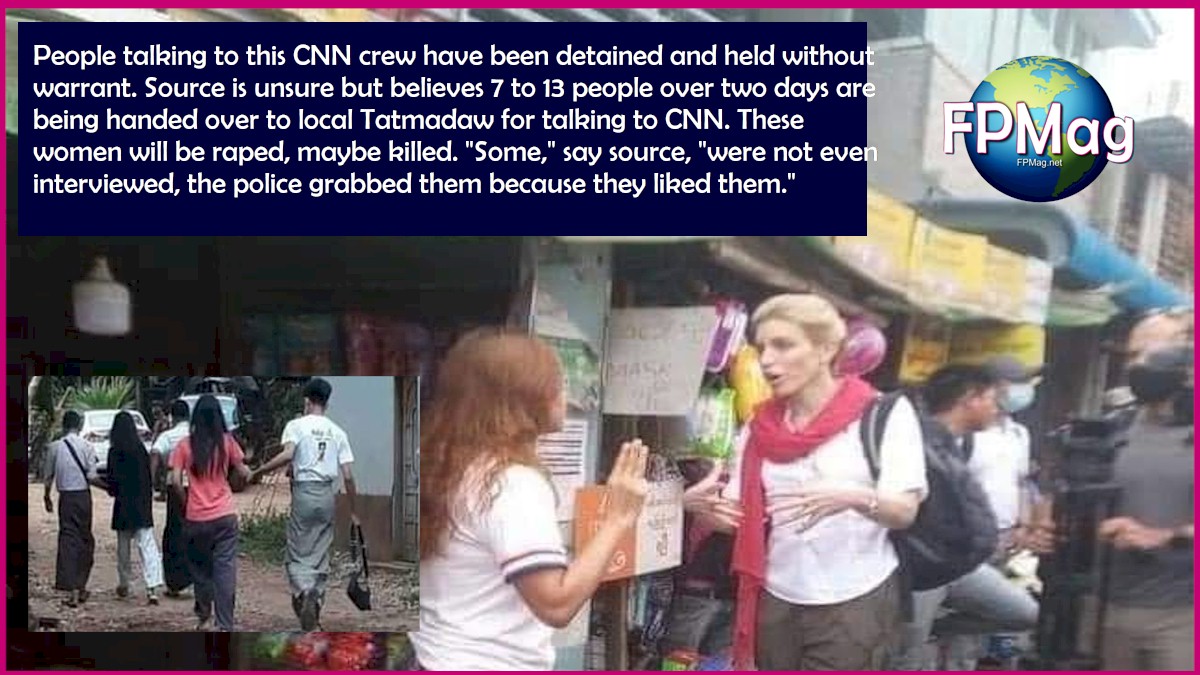 People talking to this CNN crew have been detained and held without warrant. Source is unsure but believes 7 to 13 people over two days are being handed over to local Tatmadaw for talking to CNN. These women will be raped, maybe killed. “Some,” say source, “were not even interviewed, the police grabbed them because they liked them.”

The source who cannot and should not be identified believes, “7 to 13 people have been held [not yet confirmed by FPMag] and some continue to be held by Tatmadaw for talking to CNN, because of  [an alleged] deal that CNN’s Clarissa Ward made with Tatmadaw. You cannot make deals with General Min Aung Hlaing or his terrorists,” she said with some loudness.

Two women democracy advocates were taken away after being interviewed by CNN under a “bad deal” with genocidal, murderous junta in Myanmar that tags interviewees for reprisal. 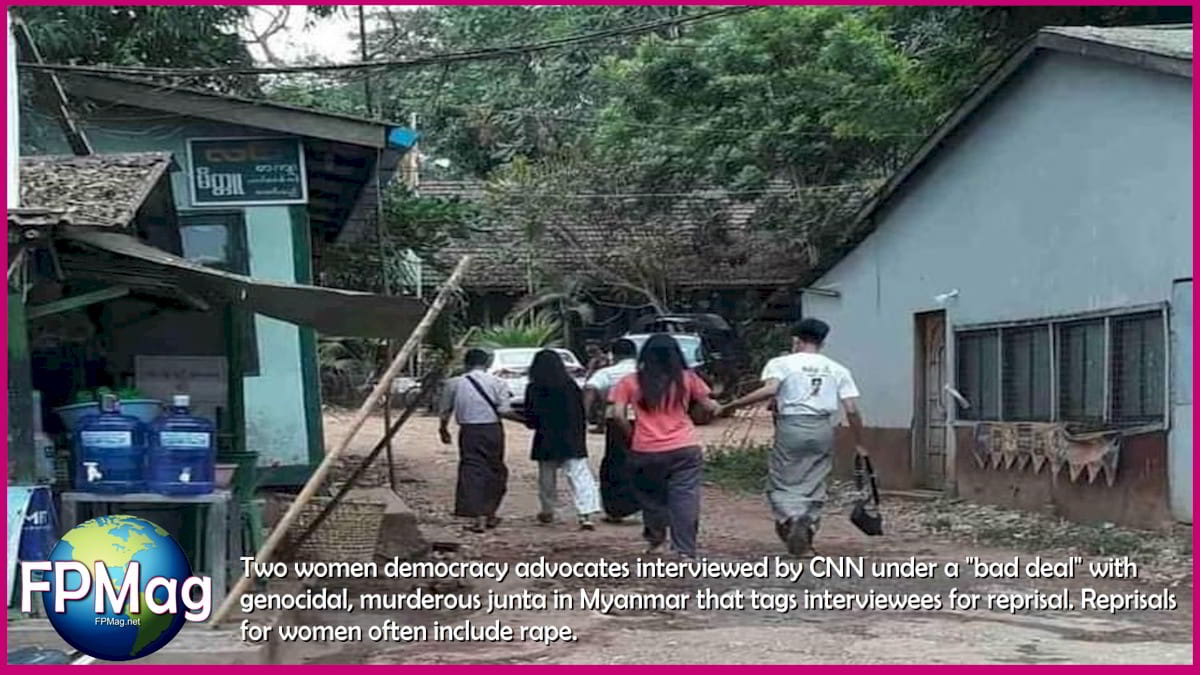 Two women democracy advocates were taken away after being interviewed by CNN under a “bad deal” with genocidal, murderous junta in Myanmar that tags interviewees for reprisal. Reprisals for women often include rape. Photo Credit: Source Supplied Art/Cropping/Enhancement: Rosa Yamamoto FPMag