“Matt Gaetz’s  (38) stupid talk since 2018, propelling media accounts about his alleged sexually improper conduct, does indeed imply he is a rapist, because paid minors cannot consent—they are coerced,” says an expert on rape crime, who profiles rapists, working as a war zone rape-crime investigator.

But Mr. Gaetz maintains “First, I have never, ever paid for sex,” he wrote.

“And second, I, as an adult man, have not slept with a 17-year-old,” Gaetz specified.

Mr. Gaetz has not been charged with any crime to date but he is allegedly under a number of investigations for paying for sex and cross-border trafficking according to at least a dozen news reports.

GOP House Leader Kevin McCarthy said earlier Thursday that, “Matt Gaetz is the same as any American. He’s innocent until proven guilty. There’s no charge against him yet. If a charge comes forward, that would be dealt with at that time.”

FPMag looks at the American ‘open source process’ and bizarre public hanging of Gaetz. Nobody has been outspoken about the rights of the correspondent females and their hanging is as high as that of Gaetz. The nomenclature that is bandied around, shows a huge misogyny problem in the USA. 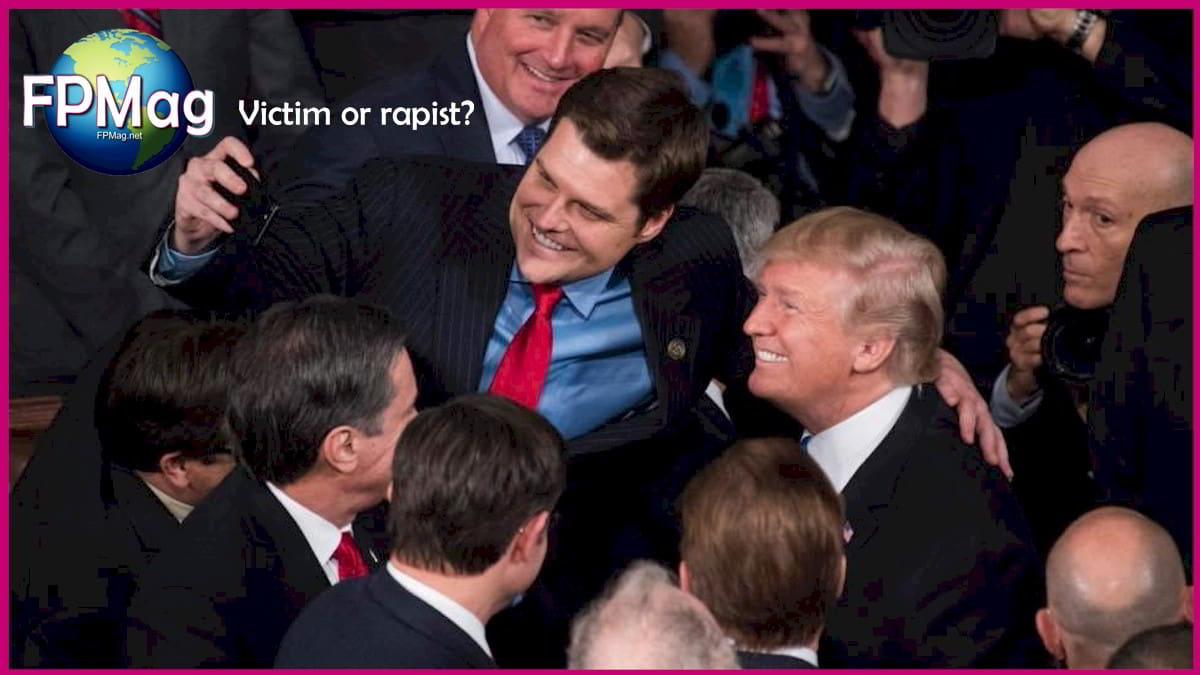 Grace Edwards adds that Gaetz’s public persona suggests a profile of Mr. Gaetz wherein the Congressman is seen as a person whose status as a congressman since 2016 has gone to his head with a testosterone storm of believed impunity. “He has been bragging for a couple years about having sex with very young women. That is not the normal boast of a US Congressman and implies trouble in discerning right from wrong, the mark of a criminal mind.”

She suggests Gaetz’s life has likely been a series of misogynistic incidents that branded him as “one of the boys” among Trump Republicans but “those types of people have no loyalty and Gaetz has been kicked to the curb by people who know what he did”.

Gaetz is categorically not a ‘pedophile‘, as many have called him, say three doctors and four therapists FPMag asked while they were all sitting in a room together.

“The women alleged to be part of Mr. Gaetz’s sexual misconduct are well-developed reproductive-aged women,” according to persons in Florida who have seen the videos Mr. Gaetz has been sharing.

A pedophile is in a manner of speaking wired backwards and can only feel attraction to ‘un-developed’ persons.

Pedophilia is a mental illness that, while challenging, can be treated, but there is no cure. Treatment may include long-term psychotherapy and pharmacological solutions that alter sex drive.

“Nearly all Rapists make a conscious decision to commit a crime,” says expert.

“Rapists make a conscious decision to commit a crime and can only rarely be treated. They must be imprisoned and they may be much more easily prosecuted than a real pedophile,” says Edwards.

Apparently the US Justice department is looking at cross state trafficking but RINJ Women, a global feminist group, are adamant that this is a rape case as well because consent is improbable no matter what state the parties were in. 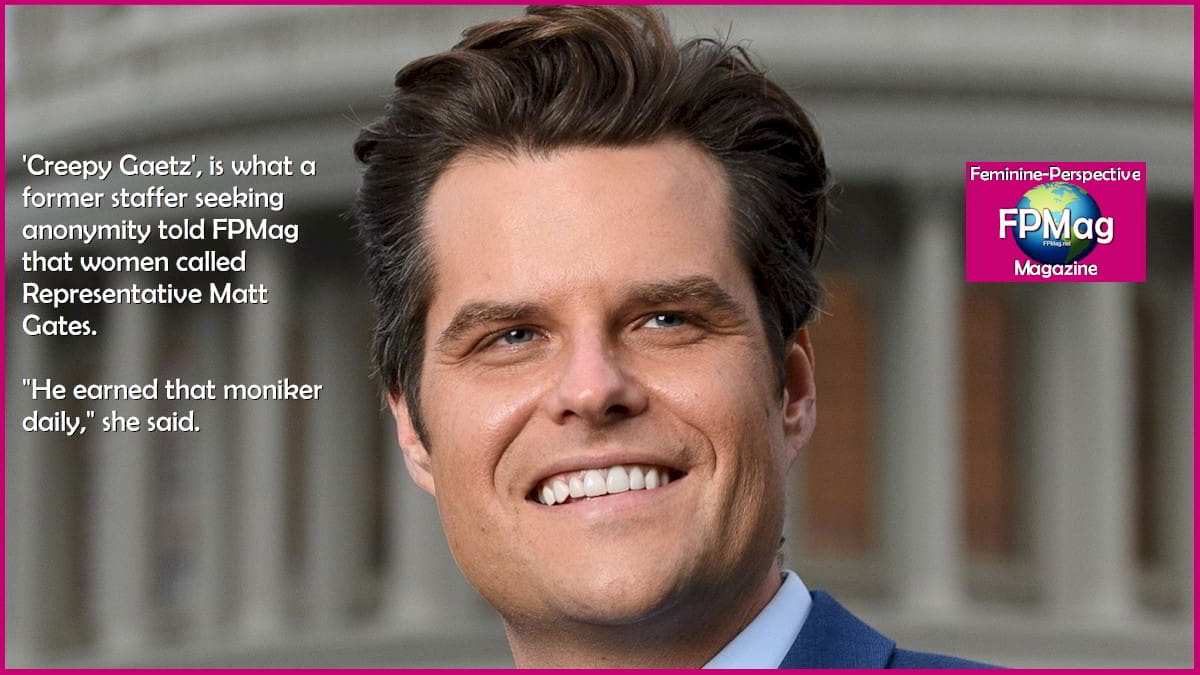 Coercion. 15 Years in prison for each Count in Florida.

“If Gaetz gave cash or other considerations to minor persons (Under the age of majority and not to be confused as ‘age-of-consent’.) Gaetz has no entitlement to a reasonable belief he has consent from a minor person to have sex. Consent requires an unblemished, unequivocal, un-controverted agreement to the act of sex. Paying a minor for sex is illegal in the United States and it also removes any chance of consent because it is coercion.  Any form of coercion of a minor removes any pretext of consent,” says Edwards and her thesis is confirmed by two of her volunteer supervisors including one US Prosecutor.

Florida Congressman Matt Gaetz, is not lately responding to specific comment requests from FPMag or any other media as far as we can determine, but that probably is the advise from his campaign-paid lawyers at Venable LLP, who also do not wish to comment.

Likely Gaetz’s personal lawyers Mark Mukasey and Isabelle Kirshner, of some considerable acclaim as good lawyers, have also told him to STFU. Gaetz’s past statements to the public seem to have been highly incriminating, if it is true he has been quoted accurately.

A dilemma happens when an adult male takes a girlfriend who is old enough to boink but too young for everything else an adult couple can do.

“That is not a problem for two seventeen-year-olds or a young close-in-age couple who neither can order a drink; neither can fill out a credit card application; and  neither can sign a marriage certificate in most places (but not all) until they are older, and that would likely be their eventual plan in their blessed loving hearts,” says nurse Sandra Ellingsworth from Sidney Australia who has worked as a counsellor and therapist for many years.

“But there is nothing so blessed in Matt Gaetz’s heart if the stories that are circulating are true, particularly the stories of Mr. Joel Greenberg, reportedly in U.S. Marshal protective custody, likely as a witness against Gaetz in exchange for perhaps a lenient sentence for his own crimes. Credible reports suggest Mr. Greenberg was a procurer of young women for Mr. Gaetz who was paying Mr. Greenberg a lot of money for those services,” adds Ellingsworth.

“Boinking a very young woman may have convinced Matt Gaetz he was in love; he then wanted to be with his partner in public; and he then wanted to do all the things a couple does together, like dance with hoola-hoops naked, or have a couples-dinner dinner with Tucker Carlson and his wife, (groan),” exclaimed some sarcastic Republican contacts, now visiting long-term in South Beach Fla., (as things open up), who wish to remain anonymous. They say they saw ‘naked dancing’ of ‘sexy women’ (no mention of kids) in videos Mr. Gaetz was showing on his smartphone. “Gaetz shot his mouth off too often,” they say.

“But is this a young guy whose crime is shooting his mouth off about ecstasy and sex he never had? It doesn’t seem like that, hence we all need to wait for the FBI to finish their work. Until then it is a tempest in a tea pot,” suggests Cassie Anderson, another rape crime investigator.

Reportage by the Daily Beast suggests Gaetz was paying a lot of money to Mr. Greenberg via Android application Venmo which funds were allegedly then used to  ‘grease the palms of the minor(s)’ the two men allegedly partied with.

Analysis: What do we see?

America is one of the most misogynistic countries in the world. America wants to make its girls, chattels of the patriarch.

In many American states, especially Republican States, a girl is the chattel of her father until 21 years of age and she may not consent to sex until 18 years of age according to Florida State documents.

Where did Matt Gaetz boink his alleged 17-year-old girl friend? Was there even such a person? He says “No”.

What could Matt Gaetz’s lawyers say to their client? This?  “Matt. We need to talk. Tell your GF to go home and do her homework and you come sit down and listen. STFU!”

America common law is steeped in old Roman (Christian) and  Jewish (Judaism) patriarchal culture on the ownership of the family’s females.

The minor daughter fares worst. She is owned and not by the one who is boinking her, as Matt Gaetz may be about to learn. He gave her money? That is coercion and she cannot consent to anything.

“The female lowest on the rungs of autonomy and status is the minor daughter,” as Judith Romney Wegner in her book (“Chattel or person…” Oxford University Press, New York bluntly explains, “She is a sexual chattel.” ( Wegner “Chattel or person?”)

The antithesis to American girlhood chattels

Wegner’s analysis matches the above three women with three subclasses of autonomous women, each forming the mirror image of one of the dependent classes:

And that is the problem with the Matt Gaetz matter and why it cannot be seen clearly: American Misogyny.