Following the Saturday meeting of ASEAN in which a poignant message was delivered to Myanmar coup d’etat leader Senior General Min Aung Hliang, the General, who is under investigation by the ICC and possibly facing a life-sentence along with 5 other 1 February 2021 Junta leaders for crimes against humanity, sent a clear message to ASEAN and its demands for a peaceable solution in Myanmar.

Senior General Min Aung Hliang’s message to ASEAN was his continuing his brutality against Myanmar civilians with a vengeance. 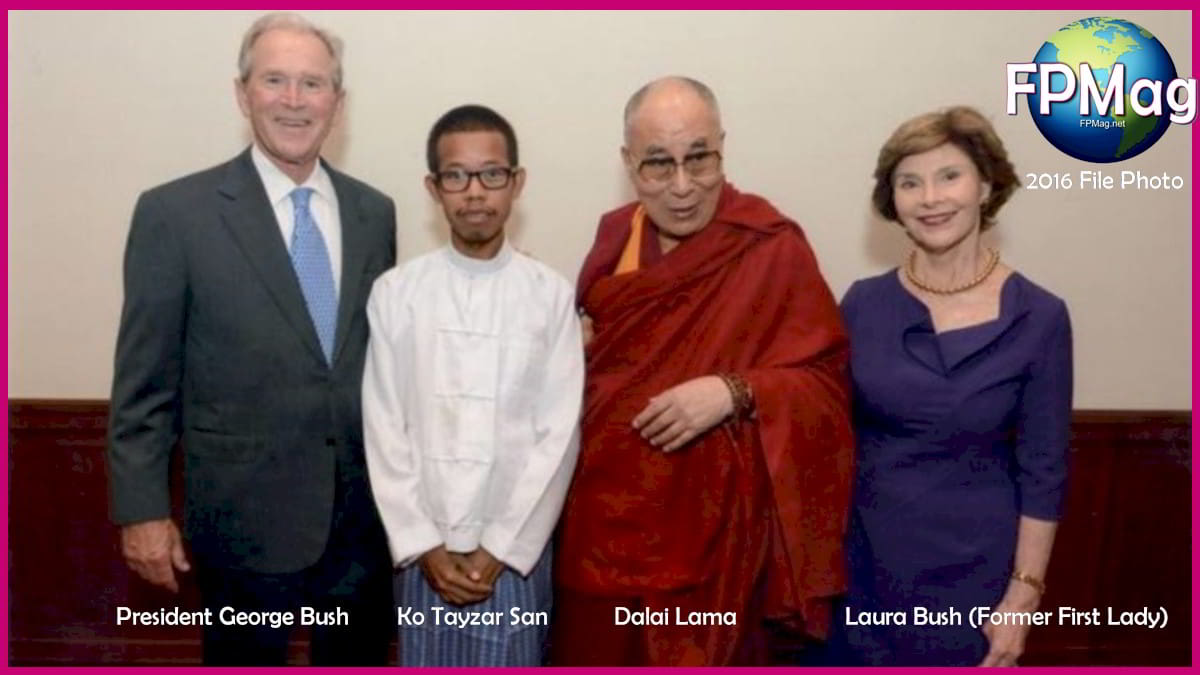 Junta leader Min Aung Hliang sent soldiers to the home of Myanmar democracy activist and protest leader Ko Tayzar San in Mandalay and forcibly entered the house of his mother by smashing down the complete door frame.

Local newspaper Irawaddy reports that, “The attempt to detain the 32-year-old Tayzar San followed the capture of another protest leader, Ko Wai Moe Naing in Sagaing Region’s Monywa. His mother said she has lost contact with her son since then and is worried about his safety.”

The protest leader was not there at the time of the raid according to Irwaddy as he has been in hiding for some time.

Ko Tayzar San is shown in the picture above standing between US President George Bush and Tibet spiritual leader, Dalai Lama.

Torture including beatings and body cuttings with torture kits continued as one soldier of the Tatmadaw escaped to the West and told stories of horrific violations.

Min Min Soe, lawyer for Aung San Suu Kyi, said to reporters Monday that the procedures expected did not take place and that the case has been adjourned until 10 May 2021.

“When the judge asked which stage they [the prosecution] have reached, they replied they couldn’t tell specifically,” Min Min Soe told reporters, adding, “I think she [Aung San Suu Kyi], is not getting access to watch news and television in general. I do not think she knows the current situation happening in the country.”

The democratically elected officials are charged with outrageous allegations such as violations of the military’s secrecy rules and being in possession of unlicensed walkie-talkies.

Aung San Suu Kyi (75) and her ‘National League for Democracy Party’ won in a colossal landslide in the November 2020 democratic election. Senior General Min Aung Hliang claims that there was widespread cheating in the election and that is why he staged a military coup d’etat.

Regardless of Senior General Min Aung Hliang’s claim, FPMag has learned that the coup leader plotted to oust the government in order that he could manipulate events to avoid his imprisonment by the International Criminal Court.

The accused Mr. Min Aung Hlaing allegedly confided in Vladimir Putin, according to an exclusive source close to the information, during a visit mid-2020 and before the Myanmar national elections in November, that he would ‘like to enter politics and was considering how he might do that’.

According to the wife of one of the military personnel on the week long trip to Russia in June 2020, a woman who has asked for protection and has left the country, “Min Aung Hlaing also confided to his colleagues that he thought winning an election might be more difficult than staging a coup” to allow himself and the other generals an “opportunity of impunity from International Criminal Court arrest”.

The woman emphatically stated that some junior officers feel that Min Aung Hlaing intends to stay in power by force for the rest of his natural life. A recent defection by an officer of the 99th Infantry which was front-and-center along with the 33rd Light Infantry Division in the 2016-2017 crimes against humanity in the Rakhine province against the Rohingya people, confirms some of what this source has been saying.

Appendix (Background to the above story)

Defecting soldier Hein Thaw Oo from the Myanmar military’s (Tatmadaw) 99th Light Infantry Division, led by alleged genocide criminal Brigadier-General Than Oo,  recently went AWOL from his army base in Meiktila according to his own statement on Radio Free Asia.

The major told human rights activists plus a journalist from Radio Free Asia that the army is very corrupt at the top.

RFA: Why did you decide to leave your military post without permission?

Defecting soldier Hein Thaw Oo: The new officers who were appointed recently are pretty corrupt. They oppress the staff below them no matter how upright they are. If you are upright, you will never get promoted for sure. By the time you become a major in the military, you have been there long enough and you know them pretty well. They use all kinds of tactics to make sure such officers don’t quit. When you get to a high-ranking level, they are pretty concerned that you might betray them, so they offer you all kinds of opportunities, even though lowranking soldiers are starving and barely surviving. In which other countries are soldiers forced to eat the bark of a banana tree? They take action against low-ranking military officers for accepting bribes 200,000 or 300,000 kyats (U.S. $140-210). But they turn blind eyes to the high-ranking officers who take in 300 million kyats (U.S. $203,400) or as much as a billion kyats (U.S. $678,000). The military guarantees that an officer can resign after 10 years of service, but [in reality] they don’t allow anyone who wants to resign to leave. They give the excuse that an officer is required to own a house in order to resign. It’s unpractical because those in service on the front lines can’t afford to buy a house on their salaries. All the officers resort to corruption and take bribes as they continue their service. I decided that I could not continue this way any longer, so I left.

RFA: What do you think about the military coup?

Defecting soldier Hein Thaw Oo: They [the military] always have plots for coups. They are not new. Military leaders are afraid of letting their power go.

RFA: Were you aware of their plan for the recent military coup?

RFA: Since when did you know about the plan?

Defecting soldier Hein Thaw Oo: I saw it coming as early as 2015 before they transferred the power to the National League for Democracy. I heard more revealing information in the last two years.

RFA: What kind of information?

Defecting soldier Hein Thaw Oo: Before the (Nov. 8, 2020) election, the commanders of Special Command
Division of the Ministry of Defense, who are of the lieutenant-general rank, toured the
military command divisions across the country. They lectured soldiers about the
consolidation of intra-military unity. It is a topic they frequently spoken about before. They asked them to make sure that none of the military units broke away no matter what the pressure was from outside elements. As I reflected on some of the speeches they had given before the elections, I knew that a military coup was coming.

RFA: What’s needed for the Spring Revolution, as the protest movement is called
domestically, to succeed?

Defecting soldier Hein Thaw Oo: There needs to be unity among ethnic armed groups. There is unity among the people in their minds, but it cannot be implemented on the ground. That’s because there are informers and spies among the people. The unity of the people must be formalized. There is a common motto among world militaries that a soldier needs to know about his enemy and about himself. If you fight a battle without the knowledge of these two, you will lose. If the civil disobedience movement continues, there could be less need for outside aid. But if it fails, there will be greater need for outside aid. If you are going to do something, you have to make plans, keeping in your mind your potential losses and gains. Otherwise, more and more lives will be lost. You need to elect a good leader and follow the  leader’s guidance. In a war, whoever survives the battle will write its history.

RFA: How do you assess the strength of the Myanmar military?

Defecting soldier Hein Thaw Oo: Among the infantry soldiers, some are fighting the battle on the front lines, while others are not going to the front lines. There are many soldiers who are not familiar with battle. They might be able to fire a gun, but they won’t hit the target. At most, there are only around 200,000 soldiers who can skillfully fire a gun. But, in the end, the decisive factor for winning a battle is not the guns. It is the artillery and the operations behind them.

RFA: If the plan to establish a federal army goes forward, what are the chances that
Myanmar soldiers will defect and join the new force?

Defecting soldier Hein Thaw Oo: If that is the case, then it depends on how much guarantee they have for security for themselves and for their families. The majority of the soldiers want to take the side of the just organization, but they are locked up in the incentives. They are prevented from doing so by fear. They are also hampered by deeply rooted beliefs. They also worried for their families. They are afraid that their families might be punished for their actions. Some are given wealth, possessions, and positions to stay. If the plans for a federal army succeed and the organization is successful, then it will erase their fears, and they will join it in droves. If the opposing sides can establish a free territory or a base in a city, then we will  see divisions within the military.

Recent Articles on this topic:

Six Tatmadaw Generals who led the 1 February Junta Coup are also alleged criminals against humanity who led ‘genocidal actions’ against the Rohingya people in 2016-2017. They are:

(The UN investigative report of 2019 on the conduct of these men said that ethnic cleansing is evident and that their crimes have “all the hallmarks of genocide”. The report of the UN investigative team’s findings is so graphic that Lise Gregoire-van Haaren, deputy permanent representative of the Netherlands to the UN, felt  compelled to say that “The number of heavily traumatized women, men and children is beyond people’s comprehension. Myanmar must cooperate so Rohingya can return in a safe, dignified and sustainable way [to their homes in Myanmar].”)