ASEAN adds legitimacy to Myanmar-Six ICC subjects and their coup

“If ASEAN ever had a chance to assert itself in favour of democracy and the rule of law it was this day’s meeting in Jakarta. The day showed ASEAN having as much strength as a wet tea-bag soaking at the bottom of the South China Sea,” said Sandra Ellingsworth, a RINJ Foundation humanitarian worker in Myanmar.

Ellingsworth reports that protest organizers and human rights activists in Myanmar are also unhappy with the outcome of the conference on the Myanmar Tatmadaw coup d’etat and the slaughters of getting close to 750 civilians plus the imprisonment or disappearance of nearly 4,000 persons including journalists and officials.

Two ASEAN leaders were outspoken against the coup and its bloody violence.

“The deplorable situation in Myanmar must stop immediately,” said Malaysian Prime Minister Muhyiddin Yassin as the so-called Myanmar Summit meeting of ASEAN came to an end. A source in attendance claims that the Malaysian leader as well as the Indonesian President were very blunt in their condemnation of the violence in Myanmar.

According to the same diplomat assistant, an observer from one of three nations that did not send a leader, neither the leader of Malaysia or Indonesia did acknowledge as a state head, the military junta organizer who led the bloody Myanmar coup that overthrew a democratically elected government on 1 February 2021. The source could not remember if any other participants acknowledged Min Aung Hlaing as a state leader of  ASEAN.

Only Prime Minister Muhyiddin Yassin has ever described the overthrow of the elected government of Aung San Suu Kyias as a coup d’etat. 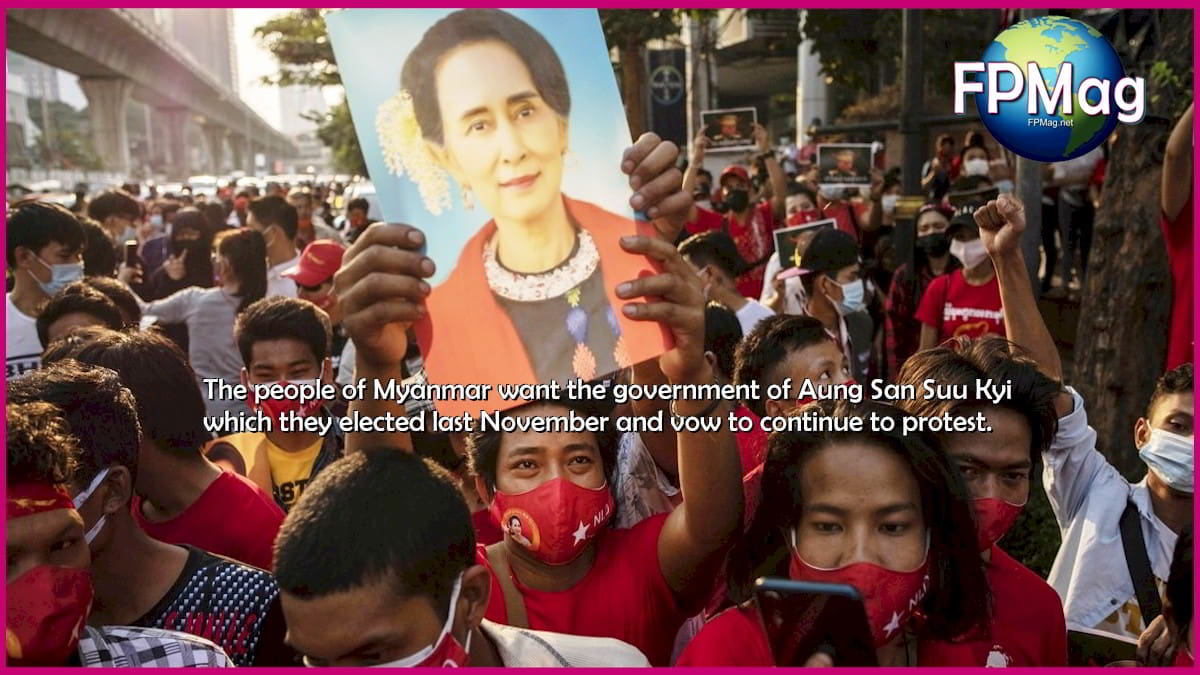 Source supplied to correspondent Sandra Ellingsworth, photo of protestors demanding the return of the government they elected in November 2020.
Art/Cropping/Enhancement: Rosa Yamamoto FPMag

Indonesian President Joko Widodo said, “The situation in Myanmar is unacceptable and should not continue. Violence must be stopped, democracy, stability and peace in Myanmar must be returned immediately.”

President Widodo, who called the meeting,  said, “The interests of the people of Myanmar must always be the priority.”

Under continued discussion is the possibility of a visit to Myanmar by this year’s chair of ASEAN. the Sultan of Brunei, said the source who on this and other occasions does not wish to be named due to their not being authorized to speak officially to the press.

The two leaders of Indonesia and Malaysia, were likely referring to the staggering number of children and teen murders, by the Tatmadaw under the coup d’etat leadership of Senior General Min Aung Hlaing who is also accused of being responsible for the genocidal attacks on the Rohingya women, since 2016, and their families, of Myanmar, a million of whom are living in squalor in camps around Bengal Bay in Bangladesh, mostly forgotten by the world.

General Min Aung Hlaing along with five other Tatmadaw generals have been named by the United Nations and in various complaints to the International Criminal Court as perpetrators of crimes against humanity.

Min Aung Hlaing is the only person invited to the ASEAN  summit from Myanmar. ASEAN did not invite the members of the elected government which took office after a November 2020 election but were forced out of their seats violently by a military coup d’etat led by Senior General Min Aung Hlaing on 1 February 2021.

With pressure on the ASEAN group of Southeast Asian Nations to come up with a solution including the ouster of Myanmar from ASEAN as one suggestion, the group had invited the bloody coup mastermind, a man who is accused of genocide by a United Nations investigative team and is under full investigation by International Criminal Court for crimes against humanity, and is likely to spend decades in prison, if arrested, for alleged genocide according to the ICC and the UN. 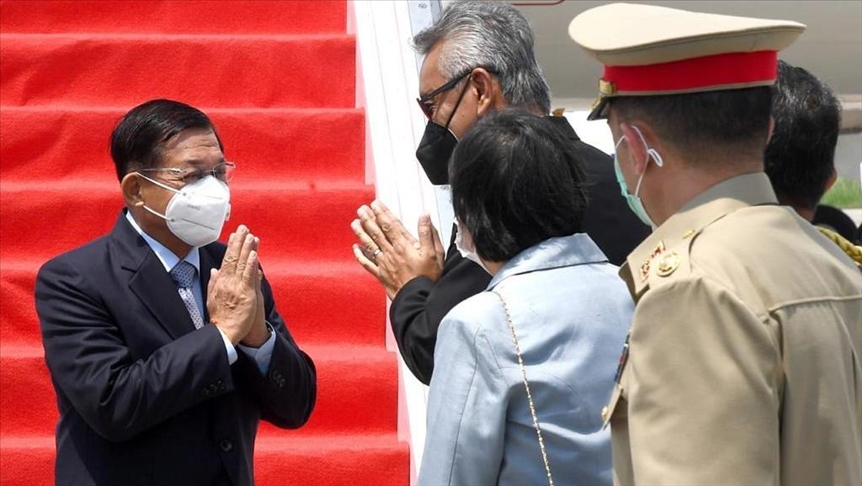 ASEAN Handout Photo of the arrival of the 1 February Coup d’etat leader, Min Aung Hlaing, a man who is also under investigation by the International Criminal Court for crimes against humanity in Myanmar.

The accused Mr. Min Aung Hlaing allegedly confided in Vladimir Putin during a visit mid-2020 and before the Myanmar national elections in November, that he would like to enter politics and was considering how he might do that.

According to the wife of one of the military personnel on the week long trip to Russia in June 2020, a woman who has asked for protection and has left the country, Min Aung Hlaing also confided to his colleagues that he thought winning an election might be more difficult than staging a coup to allow himself and the other generals an opportunity of impunity from International Criminal Court arrest.

The woman emphatically stated that some junior officers feel that Min Aung Hlaing intends to stay in power by force for the rest of his natural life.

Another example of this play may be Philippines President Rodrigo Duterte who is allowed only one six-year term which ends next year. According to a source close to his daughter, Duterte may seek to control the PH government for another six years by running as Vice President to Bong Go Marcos–the son of deposed dictator the late Ferdinand Marcos—who wants to be the next President of the Philippines.

Three countries did not send their leaders to the ASEAN summit which started at 2:30PM local time Saturday. The Philippines whose president is also  alleged to have commit crimes against humanity and is under examination by the International Criminal Court; Thailand which is also ruled by a military junta since 2014 after a coup d’etat then; and Laos which seems to have backed out at the last minute. Laos President Thongloun Sisoulith was only recently elected on 22 March 2021.

Recent Articles on this topic:

Six Tatmadaw Generals who led the 1 February Junta Coup are also alleged criminals against humanity who led ‘genocidal actions’ against the Rohingya people in 2016-2017. They are:

(The UN investigative report of 2019 on the conduct of these men said that ethnic cleansing is evident and that their crimes have “all the hallmarks of genocide”. The report of the UN investigative team’s findings is so graphic that Lise Gregoire-van Haaren, deputy permanent representative of the Netherlands to the UN, felt  compelled to say that “The number of heavily traumatized women, men and children is beyond people’s comprehension. Myanmar must cooperate so Rohingya can return in a safe, dignified and sustainable way [to their homes in Myanmar].”)